Keeping WV Wild will require the effort of thousands of people. The organization strives to educate WV residents and visitors about the environmental problems and impact of mountaintop coal mining on the beautiful state and engage those interested in joining the efforts to “Keep WV Wild.” In addition to providing the detailed facts and issues information on these pages, we offer opportunities for activists to get involved in issues affecting West Virginia throughout the year. Click here to get involved!

Want to know more about beautiful West Virginia? Interested in the unique history of the state? How about how West Virginia was formed or why it is losing its height? The navigation links above will give you all the detailed information about what makes West Virginia such a wild, wonderful place. 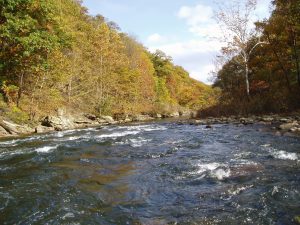 The lush forests of southern West Virginia and eastern Kentucky are among the most biologically diverse temperate forests on Earth. World Wildlife Fund says this area is a biodiversity hotspot that, if saved, will go far in protecting the vast variety of life on Earth. A spring jaunt in the woods affirms that these forests provide habitat and breeding grounds for an incredible wealth of plant and animal life, including a melodious array of flitting, colorful neotropical migrant birds.

These verdant forests, sheltering mountains and stream-fed valleys have nurtured an Appalachian culture for over 200 years, and before that were the hunting grounds of native peoples.

West Virginia is the only state in the nation located entirely within the Appalachian Mountain range, and in which all areas are mountainous; for this reason it is nicknamed The Mountain State. About 75% of the state is within the Cumberland Plateau and Allegheny Plateau regions. Though the relief is not high, the plateau region is extremely rugged in most areas.

On the eastern state line with Virginia, high peaks in the Monongahela National Forest region give rise to an island of colder climate and ecosystems similar to those of northern New England and eastern Canada. The highest point in the state is atop Spruce Knob, which at 4,863 feet (1,482 m)[1] is covered in a boreal forest of dense spruce trees at altitudes above 4,000 feet (1,220 m). Spruce Knob lies within the Monongahela National Forest and is a part of the Spruce Knob-Seneca Rocks National Recreation Area. [2] A total of six wilderness areas can also be found within the forest. Outside the forest to the south, the New River Gorge is a 1,000 foot (304 m) deep canyon carved by the New River. The National Park Service manages a portion of the gorge and river that has been designated as the New River Gorge National River, one of only 15 rivers in the U.S. with this level of protection. Other areas under protection and management include:

The native vegetation for most of the state was originally mixed hardwood forest of oak, chestnut, maple, beech, and white pine, with willow and American sycamore along the state’s waterways. Many of the areas are rich in biodiversity and scenic beauty, a fact that is appreciated by native West Virginians, who refer to their home as Almost Heaven. Ecologically, most of West Virginia falls into the Appalachian mixed mesophytic forests ecoregion. The Appalachian mixed mesophytic forests comprise an ecoregion in the Appalachian Mountains in eastern North America. They are one of the most biologically diverse temperate forest regions on earth. It has an unusually diverse tree flora, with as many as 30 tree species at a single site. The rivers of the ecoregion have the highest species richness of any freshwater ecosystem. In particular, there are a large number of endemic fish and shellfish species. The rich diversity of the area has several contributing factors. It was an unglaciated refugia for many species. It shares species with the high elevation Appalachian-Blue Ridge forests to the east, the hardwood forests to the west, and the mixed hardwood/conifer forests to the south.

The underlying rock strata are sandstones, shales, bituminous coal beds, and limestones laid down in a nearshore environment from sediments derived from mountains to the east, in a shallow inland sea on the west. Some beds illustrate a coastal swamp environment, some river delta, some shallow water. Sea level rose and fell many times during the Mississippian and Pennsylvanian eras, giving a variety of rock strata. The Appalachian Mountains are some of the oldest on earth, having formed over 300 million years ago.