Mountaintop Removal (MTR) is the most outrageous of all coal mining methods. In mountaintop removal, a mountain is first cleared of all vegetation. Valuable hardwood is often just pushed into an adjacent valley to get to the coal faster. Legally, the topsoil from the planned MTR site is required to be collected and set aside so it can be returned after the mining is finished. Since the profitable wood is shoved into the valley, it is no surprise that the cost to store topsoil follows soon after. (source: CMRW) 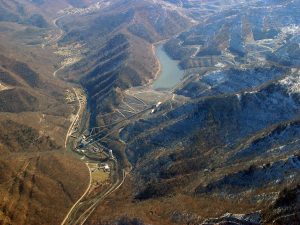 Next holes are drilled and filled with explosives similar to those used in the Oklahoma City Bombing, but with up to 100 times the explosive force. In West Virginia alone, nearly three million pounds of explosives are detonated per day, or, in a year, 27 times the explosive force of the atomic bomb dropped on Hiroshima. These powerful blasts have been known to crack foundations of nearby homes. In addition to the property damage caused by blasting, the silica dust is a health hazard to people living downwind.

After a blast is set off, the rubble (called overburden) is picked up by giant machines and dropped into nearby valleys creating valley fills. These fills can be a mile wide and hundreds of feet high and usually bury a waterway. Along with the destruction of the valley ecosystem and the stream, Valley fills also run the risk of collapse. Due to their steep slope, heavy rainfall can cause failure.

With the mountaintop gone, the coal and easily be scooped up with large machinery at which point the coal is cleaned. This blast, clear and scoop process can be done for layer after layer of coal until it is uneconomical to continue.

When this happens, the final stage of MTR takes place, reclamation. Reclamation usually consists of little more than rough grading and spraying hydroseed over the rocky landscape. Pine trees are the only trees that don’t die immediately and even they don’t grow very large. Sites reclaimed 20 years ago look the same now as they did then.

While these sites can be superficially reclaimed, the water tables are forever ruined, and this cost would make mining economically prohibitive. If coal companies were forced to pay for these externalities, rather than passing the burden along to the taxpayer and citizens living in disturbed areas, there would be no surface coal mining.