Topsoil and trees absorb rainfall, which helps protect valley communities from flooding. Mountaintop removal sites are hard and barren resulting in water rushing down to the valleys. Flooding has increased dramatically in areas around mountaintop removal sites, leaving hundreds dead and thousands homeless. In 2001 and 2002, over the span of 10 months, McDowell County was designated a federal disaster area due to flooding. Thousand were left homeless and damages were estimated at over $95 million.

Heavy rains in 2001 filled the coal impoundments at the old Alpheus Preparation Plant releasing between 5,000 and 10,000 gallons-per-minute of “black water” – water that contains coal particles and toxins – into the Tug Fork of the Big Sandy River. Had the Alpheus impoundment – two huge ponds of coal waste 23 and 45 acres – ruptured, millions of gallons of black water would have been sent into the Tug Valley, killing all aquatic life.

On October 11, 2000, in what the EPA called the worst environmental disaster ever in the South East, an impoundment near Inez, KY failed, spilling 250 millions gallons of slurry and waste-water (more than 20 times the amount of oil lost by the Exxon Valdez in the nation’s worst oil tanker spill). The spill killed all aquatic life in more than 70 miles of West Virginia and Kentucky streams. Forty-five other impoundments in West Virginia are considered at high risk for failure, and 32 are at moderate risk.

The forests of Southern Appalachia are the most biodiverse temperate forests in the world and are some of the best forest habitats in the United States. Over 400,000 acres of this mountain terrain has been blasted into a moonscape by mountaintop removal coal mining and over 1,200 miles of streams buried. Arial inspections show that between 15 and 25 percent of southern West Virginia’s mountains have been leveled by mountaintop removal mining.

Washing coal creates a toxic slurry that is often dammed near mountaintop removal mining sites.  These slurries can contain billions of gallons of toxic waste such as arsenic, mercury, chromium, cadmium, boron, selenium and nickel. 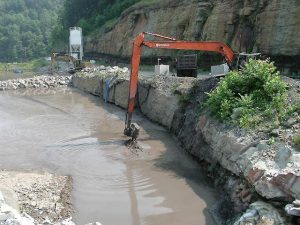 How Does Mountaintop Removal Affect the Environment?

Mountaintop Removal is occurring right at the heart of one of the nation’s main hotspots of biological diversity. According to the Nature Conservancy, the mountain region including southwest Virginia, southern West Virginia, eastern Kentucky and northeastern Tennessee contains some of the highest levels of biological diversity in the nation. This region is also at the headwaters of the drinking water supplies of many US cities.

Here are some of the impacts and concerns expressed in an EPA report:

Other quotes from the 2003 report include:

“… studies found that the natural return of forests to mountaintop mines reclaimed with grasses under hay and pasture or wildlife post-mining land uses occurs very slowly. Full reforestation across a large mine site in such cases may not occur for hundreds of years.”