How Does Mountaintop Removal Affect the Economy?

Mountaintop removal is a mining technique designed, from the very start, to take the labor force out of the mining operation. According to the Bureau of Labor Statistics, in the early 1950s, there were between 125,000 and 145,000 miners employed in West Virginia; in 2004 there were just over 16,000. During that time, coal production increased. In addition, the coal-bearing counties of Appalachia are some of the poorest in the nation, despite the fact that some of the greatest wealth is being extracted from them.

Coal industry employment has sharply decreased as a result of the mechanization involved with mountaintop removal coal mining. In 1950, West Virginia coal mines employed 143,000 miners; by 2002, that number was down to 13,653.

In West Virginia in 1998, the coal industry accounted for 18,635 jobs – only 3 percent of all jobs in the state—a steep drop from 1979 when coal mining provides 9.5 percent of the state’s jobs. Also in 1998, mountaintop removal strip mines employed a total of 2,300 people, less than 0.5 percent of all state jobs.

Although coal production rose 32 percent between 1987 and 1997, mining jobs dropped 29 percent during that same period. As more coal is produced in mountaintop removal strip mining, the number of coal mine workers decreases.

Coal-producing counties are among the poorest in the nation. McDowell County has produced more coal than any other county in the US, yet it suffers from a 37.7% poverty rate. 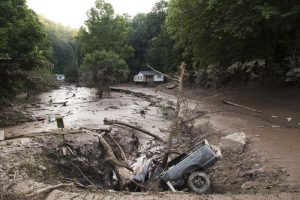 Flooding in communities near mountaintop removal sites is becoming more common and more deadly.  Residents say that flooding that happened once a decade is now happening two and three times a year.  As mountains are cleared of trees, shrubs and other plants, rainwater that usually would be caught in these natural filters is running unabated into oversaturated streams.